Componentization is the process of breaking down an interface into small reusable pieces that can be recombined.

In this article, I aim to cover what are the main goals of that process, a set of basic rules that can be applied, how to organize the different elements, and how deep we can go into that process.

What is a component?

According to dictionary.com, a component is:

The concept of component, understood as constituent element, has been around in the browsers from the beginning of the Web. Let’s take as an example a very common form control in its simplest possible configuration.

Rendered in the browsers, without any CSS, it looks like this.

Basically, with a couple of tags written in a certain order and number, we can render a native dropdown with few options. We do not need to worry about the events when expanding the dropdown, selecting an option, or typing, as well as about the internal scroll and status that keeps the selected value. All that implementation is managed by the browsers, hidden for the developers who are just consuming the select native element.

Similarly, other built-in elements like input, a, button, form, etc. have their own implementation and behavior.

Thus, a component has these qualities:

Understanding what a component is will help us in the componentization process.

The concept of component is really powerful. It allows us to think of an interface built out of nested elements, in opposition to the concept of partials, big reusable areas, that we used years ago as it was a feature in many templating systems.

With that in mind, instead of big areas, we can build smaller components with clear responsibilities. By combining them properly, they will produce the interface we want. The ability of nesting elements is the real game-changer here.

However, facing the componentization with nested elements is way more complex than the process of breaking down the site into big partials. Componentization will thus produce more unit elements but with less code, as reusability increases, and at same time cleaner, more predictable, and testable.

The first step I usually do before starting the componentization process is trying to have the team aligned in few things:

Once the team agrees, these are the steps in the componentization process:

This is probably the most complex aspect in the process: defining what the rules are and how the team should make the decisions. I have seen many failed developments because the rules were not clear, or there weren’t rules at all. Here I will describe those rules and concepts that work for me and my team.

Let’s start from what is, in my opinion, the core definition of the process. What is a UI component:

A UI component is the minimum reusable element of an interface.

As it might look like a rather simple definition, it includes a couple of key ideas. Minimum means that a component can not be broken down into smaller meaningful pieces. Reusable means it needs to solve a single problem, it needs to have a purpose and a meaning. A component should be small enough to solve a problem, but not too small to be a non-standalone part of a bigger solution.

A UI component, then, must have a unique responsibility and we, as developers, must be able to verbalize it.

Building components isolated from the environment

I understand components as independent objects to encapsulate some styles and behavior. Black boxes for parent modules that can only send them props, but ignore what happens inside them. And the other way around, components should not be aware of where they are going to be used.

A good practice then is building components isolated from the rest of the site, so the developer can focus on a single component without environmental constraints. Tools like Storybook help to accomplish this.

As a general rule, it is a good idea to avoid that components position themselves. Properties like position: absolute, position: fixed, or any other combination of props that will place the root of a component will condition later how any parent module can import that component and use it.

Following the same principle, it is also good to avoid having external margins that could push other components.

Components can get properties: values that are passed from the parent scope. Similar to abstraction in OOP, the set of properties and their types is the component API.

When designing a component’s API these are the rules I try to follow:

Final components are those which don’t accept child elements. They are at the end of the tree and they are usually simple to identify and develop as they do not need to be taken into account in the nested structure.

Examples of final components are a menu, a logo, a video, a hamburger, any form element…

Examples of containers: any kind of section, a modal, a panel, a tabs structure…

Layouts or Page components are the root component of a website. Typically, a project will have only one, maybe two in some special cases. The page component manages the main layers of the site without knowing what they contain: sticky header, side panels, content, footer…

A modifier is a flag that can change the default component behavior or appearance. With appropriate modifiers, a component with a single code base can cover more than one case, increasing reusability and reducing the complexity.

I usually approach the modifiers as mutations of three types:

A variant is a mutation that changes the component appearance right from the instantiation. Typically it refers to changes in props like color, size, or width.

A state modifies the state of an element after a user action is performed. For example, the expanded state in an expandable box, the cross state in a hamburger button, a collapsed state in a sticky header…

A context is a variant or a state applied in a parent component, which triggers some different appearance in the child component.

In my article Component mutations: an alternative to base-modifier class approach - part 2 there are examples of mutations and an approach to coding them in SCSS.

Components are the base of an interface as they are the building units, our bricks. But they are not enough to build an entire website. They need to be nested and combined to produce complex interfaces.

Nesting can be done without adding any dependency to the parent component, as it is just receiving children via slot (or children property). But combining two or more components in a parent element does create that dependency since the parent needs to import the children to consume them.

Hence, a component can eventually import other components, that at same time could import more, creating a dependency tree that can be very complex to manage.

To ease the dependency graph, I usually add two more levels in the architecture. Those levels also contain components, but their purposes are different. Having multiple levels, allows us to avoid dependencies between elements in the same level, and thus make the dependencies go in one direction.

In some other articles, I will dig deeper into the architecture system and how to connect different pieces.

Hi! My name is Joaquin Marti, Lead Frontend architect. I have been coding websites for more than 20 years. Currently I work as Tech Lead at Hanzo Studio where I manage the day to day technical team activities. Feel free to drop me a line to joaquinmarti@gmail.com. 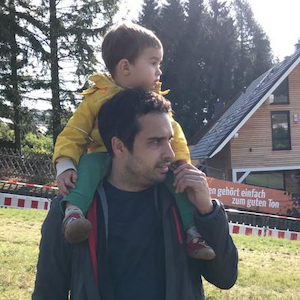